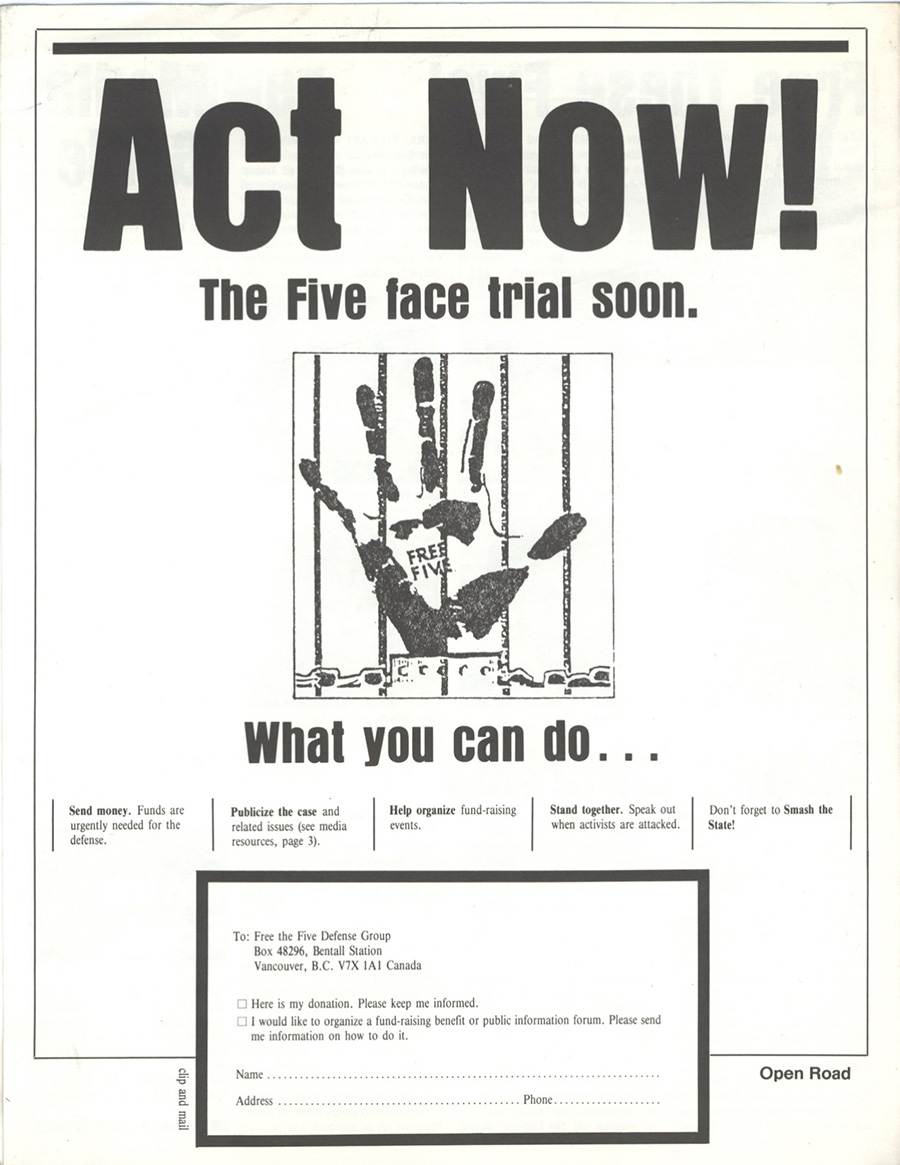 Documentary movie of bass player of the Subhumans (Canada) , Gerry “Useless” Hannah by Vancouver filmmaker, Glen Sanford (2004). Really rare film, never heard anything about this and thought this does not exist at all. Good to finally know that it does. Gerry Useless was the bass player for the Canadian punk rock group The Subhumans and was also a member of the armed revolutionary group Direct Action, also known as the Squamish Five (in the mainstream press) and the Vancouver Five (in the alternative press).

Squamish Five carried out a political campaign of “direct actions”, including the Litton Industries bombing, Litton Industries being the manufacturer of guidance systems for American nuclear cruise missiles. Hannah was convicted of conspiracy to rob an armoured car and possession of a stolen weapon, for which he received a ten-year jail sentence. He was released after serving five years of his sentence. Hannah was also one of the interview subjects in Bloodied But Unbowed, Susanne Tabata’s 2011 documentary about Vancouver’s early punk scene. He is the guy who has made the best known song of The Subhumans, Slave To My Dick.

October 14th, 1982: a truck explodes outside the Litton Industries plant in Rexdale, ON, where guidance systems for the cruise missile were manufactured, resulting in millions of dollars in damages. Direct Action again claims responsibility.

Ann Hansen, along with four others, who became to be known as the Squamish 5, eventually stood trial for these acts and was sentenced to life in prison. She served seven years.

Recorded in October 2002, Ann Hansen reflects on the successes and failures of the bombings, and dispels some of the common myths surrounding not only her actions, but armed struggle in general. She also explores the differences between direct action and terrorism as means of affecting social change; laying the groundwork for defining what direct action means, what its guiding principles are, and how it can be applied successfully and meaningfully in today’s political climate.

I Have Not Signed A Treaty With Any Government: A Brief Look At “Direct Action” and “The Wimmin’s Fire Brigade”

《In 1982, five Canadian anti-authoritarian activists, variously known as Direct Action, the Wimmin’s Fire Brigade, and the Vancouver Five, conducted a highly visible series of guerrilla actions against patriarchal, industrial civilization. When the five anarchists — two wimmin and three men — who comprised these cells were finally captured by the Canadian state in 1983, they were charged with a host of clandestine attacks on industries that represented some of the most notorious war criminals, environmental despoilers, and exploiters of wimmin and children.

The most serious charges that these anarchists faced when they were caught were related to three bombing operations, all conducted in support of massive public campaigns of protest: one against the Litton Systems plant near Toronto, where parts for Cruise missiles are made; another against the environmentally destructive Cheekye-Dunsmuir power project of British Columbia on Vancouver Island; and also a smattering against retail stores of Red Hot Video in Vancouver, where videotapes glorifying rape and other forms of savagery toward woman and children were sold. In addition, the Five were also charged with conspiring to hold up a Brinks armored car to finance their struggle (the hold-up never took place) and a variety of other weapon offenses.

Each of these actions produced very specific tangible results that assisted the above-ground campaigns they were meant to compliment : In the case of Litton Systems of Canada, there had already been an ongoing mass struggle of sit-ins and other forms of civil disobedience before their Toronto factory was partially destroyed by a bomb attack in 1982. These demonstrations escalated after the bombing resulting in Litton losing their contract to produce the guidance system for an advanced version of the Cruise missile being developed by NATO and the United States military.

The Wimmin’s Fire Brigade (WFB) actions were so successful because it was so well-integrated into, and complimentary to, the public campaigns. As B.C. Blackout, a biweekly autonomist newsletter put it, “the action of the WFB could only have the impact it did because of the months of spade work by many groups and individuals educating themselves, doing research, making contacts, pressuring the authorities, documenting their case — in short, building the infrastructure for an effective, grass-roots movement.” Since Vancouver already had a well-organized and militant campaign at work in opposition to the merchandising of violence against wimmin, the support was there when the WFB struck.

The support was also there when Ann Hansen and Julie Belmas went to trial the following year. Every day hundreds of female and male supporters rallied on the courthouse steps carrying banners with messages like “Ann Hansen is a Freedom Fighter Not a Terrorist!”. In her final court statement just before her sentencing, Ann Hansen concluded with the comment: “Businesses such as Litton, BC Hydro and Red Hot Video are the real terrorists. They are guilty of crimes against humanity and the earth, yet they are free to carry on their illegal activities while those who resist and those who are their victims remain in prison. How do we, who have no armies, weapons, power or money, stop these criminals before they destroy the earth? I believe if there is any hope for the future, it lies in our struggle.” As expected Ann was given life (she’s now out) and Julie was given 20 years. At her sentencing, Ann got one more opportunity to express herself, and she did just that by picking up a tomato she had smuggled into the courtroom and heaving it in the direction of the judge. It splattered on the curtain above his head, and he ducked out of the courtroom before he was called on to witness any further disruption of the courts decorum. In May 1983, the long-running canadian anarchist paper Kick It Over published a statement by Ann Hansen and Julie Belmas that was written from their jail cells. We would like to conclude this article with a passage from this prison statement titled, “We Are Not Terrorists”…

“Being womyn identified, politically conscious, environmentalists and determined to challenge the power and profit motives of the patriarchal society that insures the rape and mutilation of our mother earth, we refuse to accept their labels of us as terrorists. We know that there are many sisters who share our radical analysis of the issues around the charges laid on us. For centuries the authorities have reacted violently to womyn who resisted; they used to brand us as “witches” and burned us, now they label us as “terrorists” and will try to bury us in their cement tombs.

The State and it’s media are portraying us as elements of a “lunatic fringe” so that people will be frightened of us instead of relating to us with their rebellious spirits. We must not allow the liberalism of this society to hide the sickness of the rulers and rapers behind their institutions, laws and lies. We are always threatened with their violence, whether it be through nuclear power plants, nuclear weapons, industrialism, prisons or sexual terrorism in our everyday society. We will face their horrors boldly and challenge their corporate interests with the determination and strength of womyn warriors. We will see a resistance movement building, in an attempt to rid the earth of further corporate destruction so that future generations can survive.

It is not possible in this society to be a “liberated” womyn without being in a constant state of conflict and struggle. However, if our conflict and struggle is not guided by a consciousness of the magnitude of the problem, then our energies will be misdirected and futile. The womyn’s movement can not be a one-issue oriented struggle, but must understand and embrace the ecological struggle, indigenous peoples resistance and anti-imperialist liberation movements because the same patriarchal institutions that perpetuate our oppression also oppress the animals, the indigenous peoples, the third world peoples and the earth.”

In Total Strength And Resistance

Once Again, this article is nowhere near as comprehensive as it could be: herstory is full of innumerable examples of strong, defiant wimmin who have utilized revolutionary violence in their own struggle for liberation, and to deny this or attempt to discredit revolutionary violence by branding it “male identified” is bullshit and an insult to wimmin everywhere. Political oppression can only be ended through resistance, and quite often this resistance will have to take on “violent” forms. Every real freedom fighter — whether they are female or male — recognizes this at some point, and stops wasting their time engaging in irresolvable philosophical debates and instead channels their energies towards the destruction of that which oppresses us all.》 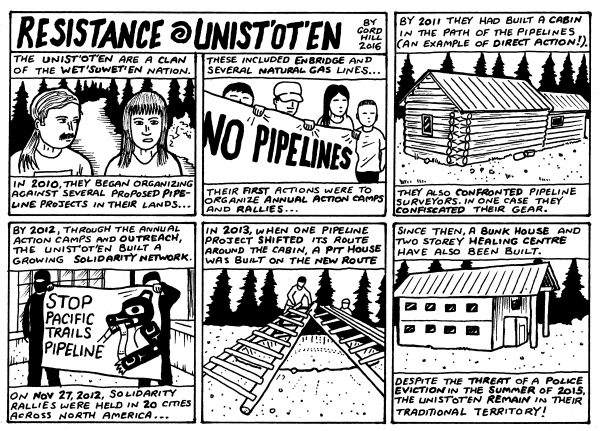 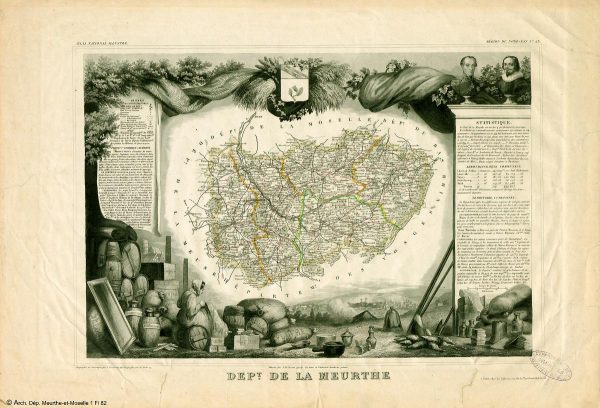 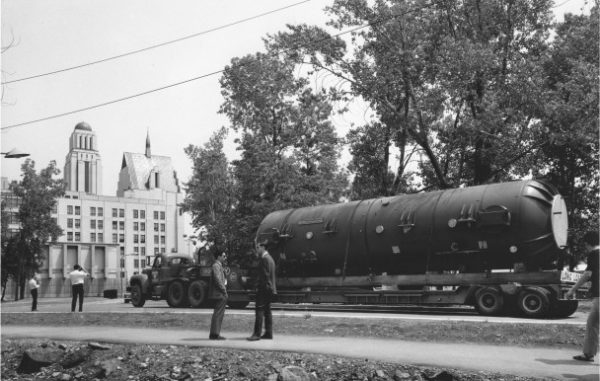